Yesterday, a good friend of mine dropped off a pair of vintage roller skates from the early 1980’s (in the original box) at my store for my eight year old. Needless to say, she had them on for hours. So, here goes today’s 80’s flashback memory…roller skating! We ALL have a memory to share. 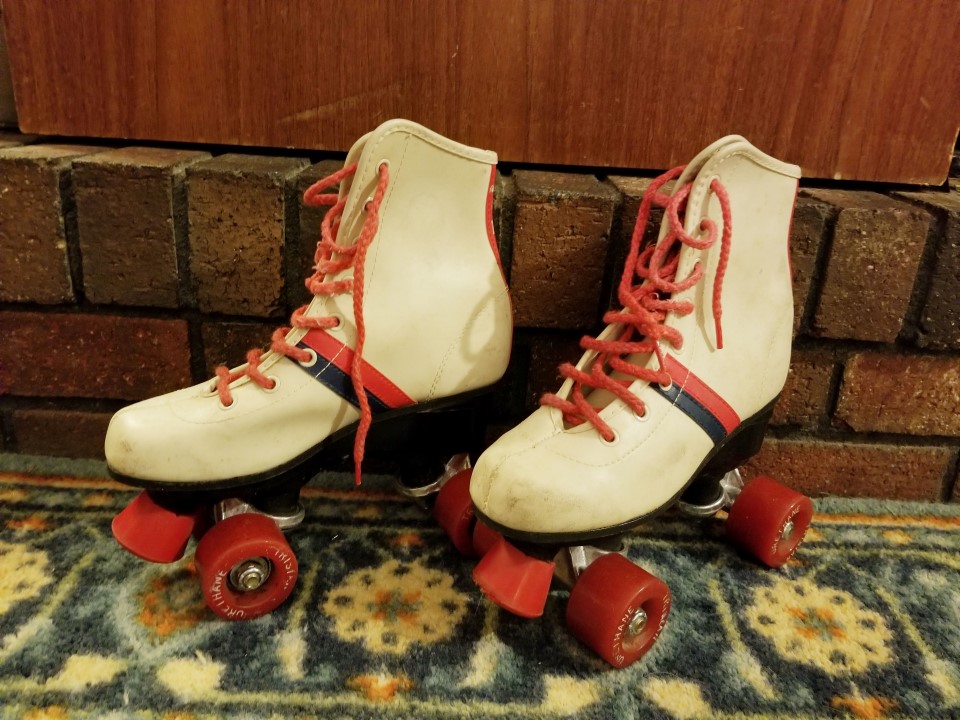 I’ve lived in New Hampshire all my life and grew up between two small towns. For entertainment, etc we either went to Manchester or Nashua. In the 1970’s through early 1980’s there was a FABULOUS roller rink called Happy Wheels; just off South Willow Street in Manchester. This place was the cats meow for roller skating with you friends. Granted, we were young at this point, but still to this day, I can close my eyes and see every detail. The older kids hated us little squirts who would get in their way when they were speeding crazily around the rink.

One song vividly sticks out in my mind from Happy Wheels, sang by Manhattan Transfer: The Boy from New York City “Ooo wah, ooo wah, cool cool kitty, tell us about the boy from New York City” It was the like the end of disco era type of transitional song. It actually makes me laugh now.

So, by the mid 1980’s me and all my friends were in middle school and going to Saturday skate nights at ConVal High School (our 9 town regional high school). There were two sessions; the first was the “family” session with the lights on and a low key atmosphere, the 2nd session was lights off and where all the COOL kids were. Of course, we opted for 2nd session…the stories, the memories! Do I DARE share? We’re talking about the 1980’s here!

The best part of 2nd session skating again, definitely the atmosphere; young teens holding hands during couples skate, teens necking on the bleachers in the dark, teens going outside throughout the night to smoke cigarettes and perhaps other stuff. Those were the days! Some of us were known to sneak into the high school and roam the halls during skating, too…hiding under desks, laughing and just being slightly mischievous. I could go into further detail about what went on back in our hay day, but I won’t. Those of you who were there totally know.

Roller skating stopped many, many years ago because they no longer wanted to ruin the gym floors. Our kiddos will never know what it was like….we ARE the generation that rocked it!  PS, thanks Kerry and Chrissy for letting me share your 1987 photo from roller skating.